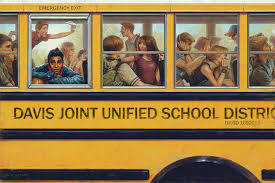 On night 8 of the new administration, I met my friend Petrea for dinner and then we went to the Mondavi Center at UC Davis for Hasan Minhaj’s comedy show. He is from Davis, California so he selected these two shows–one for general audience and one for students–to film “Homecoming King” for Netflix. He also lived out the best high school revenge story since  Romy and Michelle’s High School Reunion. Davis, a place that prides itself on its tolerance and liberalism, dished out plenty of bigotry along the way. Add some humor about growing up with immigrant parents and a beautifully constructed series of story arcs and it adds up to a great show. The audience laughed raucously and at other times you could have heard a pin drop.

The next day I started reading about the President’s Muslim Ban and other assorted travel restrictions. I watched along with the nation as people rushed to airports in support of Muslims and against the ban. Lawyers of all stripes came to the actual aid of travellers like medical professionals responding to a medical emergency on a plane. It was all heartening and fundamentally discouraging because our country is on a very dangerous path. There is no room to be smug about any of it.

On the new public square Facebook, my Christian friends posted scriptures in support of welcoming the stranger and memes about Jesus, Mary and Joseph as refugees. Beneath all of this is the tension between those who believe we are all interconnected and those who want to separate themselves; between those who love the other and themselves and those who fear the other; between people who welcome the stranger and those who slam the gate shut. And yet by dividing people in this way I succumb to practicing the same otherness that I condemn. It is hard and not so black and white.

I recently read If the Oceans Were Ink by Carla Power. It was recommended reading to learn more about the Quran and the Muslim faith. The author was raised agnostic by a father who was fascinated by all things Islam. She had the opportunity to spend a year getting to know a renowned Muslim teacher much more intimately. Sheikh Mohammad Akram Nadwi is a Cambridge professor and influential teacher. She opens up Islam for the westerner in an unprecedented way.

I discovered layers of prejudice in my own thinking that jarred me. My eyes were opened to the beauty and mystery of another faith. A faith that is the cousin to Christianity and Judaism. After years of seeing cartoonish portrayals of Islam in the media, it is at times challenging to open myself to seeing this faith in a new way.

I also realized that fundamental Christianity is wanting to impose a Christian version of Sharia law on our nation. And Christian people have misplaced their faith in God with faith in nationalism. It has helped me reaffirm my belief in separation of church and state, both for nonbelievers and for believers of all faiths.

I do not know where this Muslim Ban is headed. Today a judge has overturned the order and the administration is appealing. I just ask that if you fear Muslims that you take a moment and learn more about their faith from a sympathetic author. We share a lot of values and we share some pillars of the faith, such as Abraham. Other faiths could learn a lot about their prayer disciplines.

Most of all, the most extreme elements of Islam are as representative of their faith as Westboro Baptist Church is of Christianity. Not. And if you do not like the mix of politics and religion in Pakistan and Afghanistan, well it won’t be better if it “Christian nationalism” and our democracy. As Tony Compolo has said, “Mixing religion and politics is like mixing ice cream and manure. It doesn’t do much to the manure but it sure does ruin the ice cream.”

One thought on “First Surreal Weekend of Many”