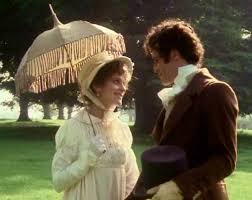 I was a freshman in college when the 1980 adaptation of Pride and Prejudice aired on Masterpiece Theater. After two episodes I couldn’t wait to find out what happened so I found a copy of Jane Austen’s masterpiece and read it almost in one swallow. I was thrilled to discover she wrote other books. No comment on the quality of my high school education, yet I am glad I discovered Jane Austen outside the classroom because I liked the freedom of experiencing it without the taint or tedium of high school discussions. I learned so much about life and myself from reading her books. I am a rebel that way.

What I also learned is that not very many people in college actually read Austen. And fewer are enthusiasts. Whereas I was so excited I began celebrating her birthday in December, to which most people reacted with a quizzical brow.

Fast forward 30+ years and imagine my thrill at finding the Jane Austen Reading Group that meets monthly at the Ella McClatchy public library. We are all enthusiasts. At last I have found a Jane loving tribe. Our most recent book for discussion was A Jane Austen Education by William Deresiewicz (WD). WD is a brilliant writer and captivated us all with his memoir based on what he learned about life while studying Austen’s work as a graduate student at Columbia University. 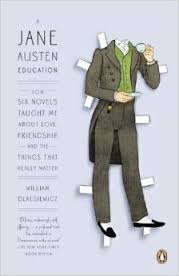 WD was 26 when he picked up Emma as part of a class assignment. He was enthralled with modern literature and had assiduously avoided 19th century literature. The timing was perfect as he discovered one of the best storyteller moralists just as he was ready to grow up.

“Learning that my feelings mattered–learning to figure out what my feelings were in the first place–was extremely liberating as I got older. I needed to realize that I could do what I wanted with my life and that I could do it just because I wanted to. Accepting that my emotions were valid and important and morally significant–they they should have a bearing on how I act–was a crucial part, at that point, of growing up.” (p 68)

Reading Jane Austen helped him realize that there was a better way to value people. “Not as fun or not fun, or stylish or not stylish, but as warm or cold, generous or selfish. People who think about others and people who don’t. People who know how to listen, and people who only know how to talk.” (p 161) Austen created characters who on the surface were recognizable and tedious, but also kind and tenderhearted (Mr. Woodhouse) or loving and cheerful (Miss Bates). Austen taught WD to appreciate the finer human qualities.

She prized people with character above people with an aristocratic title or cold hearted family members. In her early books she gave her heroines a happy ending with husband of good character, oh yeah, and bags of money. As she grew older her stories focused more on the value of friendship and she examined the differences between superficial relationships and true friendship. “Putting your friend’s welfare before your own, that was Austen’s idea of true friendship. That means admitting when you’re wrong, but even more importantly, it means being willing to tell your friend when they are… True friends do not shield you from your mistakes, they tell you about them: even at the risk of losing your friendship–which means, even at the risk of being unhappy themselves.” (p 194)

One thought on “What I Learned from Jane Austen”