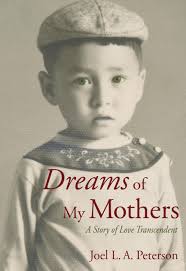 To be a leader you must know yourself. Or as they say today: Know your personal narrative. President Barack Obama’s Dreams of My Father did more to secure my vote than all of the campaign messaging combined because I knew from reading his biography that he had done of the work of understanding himself and his relationship to others in the world.

This month for the Lutheran Ladies Literary Club we read Dreams of My Mothers by Joel L. A. Peterson. Mr. Peterson fictionalizes his biography but my guess is that it is mostly understood first hand. For a first effort, it was quite good. And as an exercise in coming to terms with his personal narrative, it is an exemplar.

It also gives us a peek into what it was like for poor women in Korea during the war and then near the American military bases as they had to make hard choices about their hearts and bodies. In the story Hee Ae works as a maid with benefits for an American soldier and becomes pregnant. The shame of giving birth to a half-American baby in a society bound by familial ties and racial purity seals her fate as a poor woman. Then the baby is accidentally scalded badly and has the further stigma of being a cripple. Babies born to American soldiers overseas have neither the rights of American citizenship, and in the case of Korea, nor the rights of Korean citizenship. Her son Nam would not be able to get an education or easily find work in South Korea in the 1960-70s.

The woman struggles with her inner demons and eventually decides that the best hope for her son is to give him up for adoption to an agency with ties to churches in America. And half-way across the world, the Holy Spirit was nudging a woman Ellen Lindquist in Minnesota to adopt a boy from South Korea. And so Nam becomes Noah Lindquist and has all of the opportunity and privilege that being an American gives in this world.

He did face prejudice for his crippled hand and for being “Oriental,” however the love of his family—mother, father and four siblings—helped him achieve great worldly success. Indeed, his parents especially instilled in him many fine values both through their teaching and mainly through their example.

The climax of the book occurs when Noah is in Japan as a Rotary scholar and has the opportunity to travel to South Korea and meet up with his first mother. This is when he fully embraces his identity as American Noah Lindquist.

My favorite passage is when an ex-pat in Japan tells him, “Being American isn’t being white or Western. It is about freely embracing a set of ideals and beliefs. And it is these shared ideals and beliefs, which are not coerced, and the shared efforts in striving to perfect their realization that binds us as a people and as a nation.” (p. 237)

My journey to know my story has been less about race and more about gender and what it means to be a daughter of the West. Wallace Stegner’s books had a profound impact on me as did Virginia Woolf’s essay A Room of One’s Own. I still feel I am learning who I am as I live my 53rd year and become a grandmother. To be a strong leader I need to know what is the bedrock that I am standing on for my values and my beliefs.